The Pakistan-Baluchistan issue: What can we expect in 2017 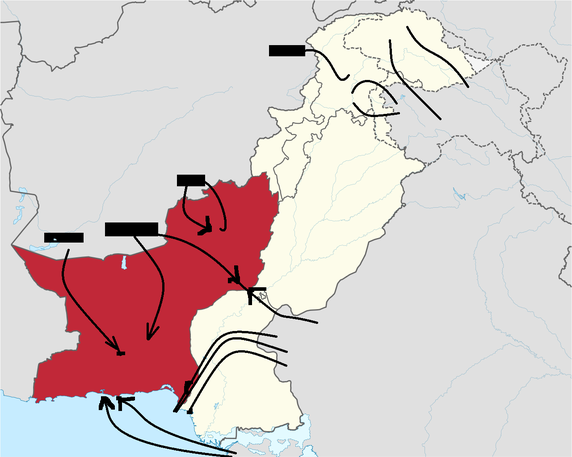 The plight of small nations or nationalities wedged between great empires has for centuries been a story of tragedy, extermination and an all-too-familiar manipulation of local aspirations towards self-determination by more powerful and cynical regimes. A modern version of the classical dilemma of a small nation under siege, fighting for survival on its own terms, appears to be emerging in Baluchistan, Pakistan’s largest province. With the issue of Baluchistan coming under scrutiny for most of 2016, India seems to have finally found the Achilles heel in Pakistan.

In a recent press release, Mr. Modi had stated, “The time has come for Pakistan to answer the world, on atrocities against people in Baluchistan and PoK.” The allegation is not false after all.

Historically, the Baluchi people have been hostile to attempts at inclusion in larger units and even at the time of partition had demanded a referendum in which independence would also be an available option.

Recently, the former Chief Minister of Baluchistan has issued a declaration from exile  in London which threatens to have serious political repercussions not only for the future of Pakistan but for the Gulf and the entire central Asian region. Ataullah Mengal, who headed the only elected Baluch government ever to serve in Pakistan’s westernmost province, had declared that the Baluch will no longer pursue their thirty-five year quest to secure ‘provincial autonomy’ as a recognized nationality within Pakistan, but will now fight for ‘complete independence’ and the end of Pakistan as a state in its present form.

Baluchistan economically stagnant, sparsely populated and mostly arid, is Pakistan’s largest, youngest and internally the most varied province. It covers a territory of approximately 134,000 square miles, larger that is than Punjab and Sindh put together. However, this almost half of Pakistan represents, according to the 2011 census, about 7% of Pakistan’s total population even after the separation of Bangladesh, with a population density of less than eight persons per square mile. Thanks to a stagnating economy, net population outflow is considerable and is likely to help maintain the present level of density for some time to come. The population of Baluchistan is ethnically, socially and culturally varied from the rest of Pakistan. Most of the Baluchis, as they are called, feel exploited at the hands of the ruling government and have been demanding independence for decades. The hue and cry has been neglected for long and so far, many have gone missing, mostly because of Pakistan’s military interventions.

Thus, the issue having finally gained international attention, 2017 brings a lot of hope for the population of Baluchistan and finds a considerable ally in its neighbor India, although India has its own political benefits in doing so. In fact, from the point of view of International relations, the issue of Baluchistan is a blessing in disguise for India, as it allows the nation to curb the increasing disturbances of Pakistan in the region of Kashmir. A lot remains to be seen as to how the two countries will tackle this seemingly intense issue.