Preparing for AIB? Here’s A Demo Test of AIB I failed 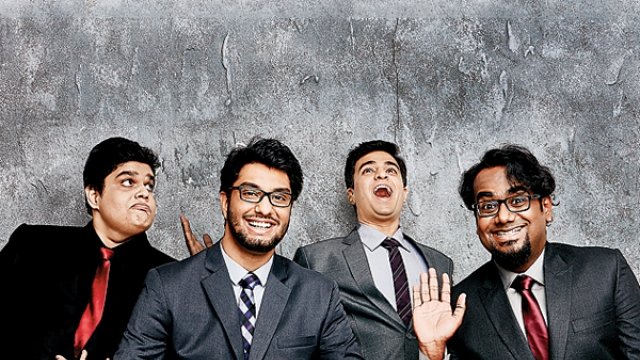 1) Write a paragraph of a parody song called Every Bollywood sad song ever OR Every bollywood item song ever.

Rather than going with ‘OR’ option, I will prefer to go with ‘AND’ because I have a good song related to both.

Every Bollywood Sad Song Ever

Once upon a time, a few thousand sad songs ago, a guy suffered heavily from a breakup so……..he sang a sad, very sad song. It goes as…..(Sing in the Dhun of Song ‘Tanhaai’ of Dil Chahta Hai)

Sad song is a must. Indian audience wait for it,

A lil bit of emotions with a hint of a cry in the singer’s sigh,

Helping the Chutiya face of the hero who is shown high,

And, when the hero remembers his beloved,

She somehow appears as a mirage, soon disappeared,

Every Bollywood Item Song Ever …..(Sing in the Dhun of Song ‘Afghan Jalebi’)

4) Tell us 3 things you don’t like about AIB right now.

2) You have access to Sunny Leone and Vishwanathan Anand. Think of a sketch idea for each of them – one for Sunny and one for Anand. (Reference: Alia Bhatt Genius Of The Year) No need to write the sketch entirely. Explain the idea, beginning, middle and end of the sketch in less than 400 words. Avoid writing listicle type videos (5 friends you meet at a wedding types). If you have a reference to another sketch, feel free to paste the link.

Idea: In this sketch, an unmarried Honey in her mid-40s (protagonist) is working in a short film where she is portrayed as a widow. She has to feel the lives of widow around her in the city. She frequently visits ‘Old Widow Home’ in the city. In the first half, Honey is portrayed a typical Indian girl. The idea is to show her as an ‘Abla Naari’. The second half shows the transformation of the girl.

The twist is that she wins an Oscar for this movie. Her life changes totally. She is deeply connected with the lives of the widow. She starts to visit the widow homes occasionally, again & again, smelling the air of it, feeling it.

Soon, she leaves the film industry and dives into the colorful but colorless life of it. The end will show her, sitting on the same widow home like a boss of the ‘Red light area’.

The first scene is on the cross road where Sunny Leone is waiting to turn the ‘Red Signal’ into ‘Green’. She goes into the flashback…

The press conference of the film promotion goes when she says, “

I have worked hard for this movie. I have poured myself completely. I still have some of their elements within me. I feel them.”

Middle: The film releases. It goes a hit. The movie is nominated for international film festivals and then Oscars. She wins it. She says she deserve it……..Tannnnnnnnnnnnnnnnnn. The transformation.

End: She drove it to her new home where she has lot of women under her supervision.

The last scene – A model in her mid-40s enters her room saying, “I am doing a short film and I need to know about your life.”

The sweet smile of Honey justifies the full circle.

Life’s Good when you pour the color into the colorless.

Idea: Everyone is aware about the intelligence of Mr.Anand, but there is one certain thing about his expertise is that Chess is a very ‘slow’ game. We will show the troubles he faces in the real life because of the wrong perception of people around him. But then, there is a U-turn in the story when he decides to do something about it. After all, he is the mastermind. He thinks of diverting his skill in the Chess. Yes. Fast Chess. Like, the game has to be completed within a limited duration of time. 20-20 Chess. 50-50 Chess. The boring game remains no boring as the ‘Nerds’ all around the world and geeks from across the earth started participating in the new form of chess.

He becomes the mentor of the ‘Fast is the new Slow’ trend of Chess.

Beginning: The fame all across the globe will be shown. He is a successful man. He is a happy man. He is receiving accolades. He is named ‘Brain-iac’ of the world. But….

The Slow man, to get out of the image, revamps himself into the fast form of Chess. Fast Chess. The fast trend is widespread and he is no longer ‘Slow’.

3) One Plus mobiles wants to be integrated in a sketch. They want to communicate that their phones come with the best cameras. Think of a sketch for them (Take Fevent and Ola- Peeke Mat Chala as examples. The sketch should be insight driven, something that doesn’t feel like an ad necessarily, and the brand is integrated seamlessly. Don’t try and make the brand the hero – this is not a 30-second commercial. This is a Youtube video – so content first. Again, no need to write the sketch entirely. Explain the idea, beginning, middle and end of the sketch in less than 400 words.)

Idea: This sketch is about a middle-class family who is living their normal life, earning enough and children are happy with everything they get from their parents. One day, one of their plans to go to Shimla is suddenly canceled. But, the story doesn’t end on a sad note.

Beginning: The Rajasthani family is preparing for the 7-day vacation to Shimla. They are exciting about the weather, the snow and the nature. A father, mother, one daughter of 15 and a son of 6 are packing, talking, gossiping, smiling, laughing about the trip starting day after tomorrow. The shopping is done. Tickets are booked.

Middle: The crisis that the father feels in the office puts his job at risk. He suddenly cancels the vacation program. The family, at the dining table, doesn’t exchange a word. The father has no word to justify because eventually the job is important. The mother consoles the children but they are annoyed. It goes for a week. The father doesn’t feel good about it. He wants to see their family united and happy. The end is when the boy of 6 is sad of the program being canceled and looks at the neighbors going on their vacation.

His father comes to him, trying to hug but the boy is still sad. The father then makes a sweet gesture to do it all right. With an already prepared snow garden in the backyard, helped by the mother, they start to photo shoot as if they are traveling in Shimla. The kids’, watching their mother and father, enjoying or pretending to laugh, go to them and starts posing. The family is happy at HOME.

Cover Letter- I know it isn’t required but yes, I think I am creative enough to be a good fit. I hope I get a call because I have been hoping for it since long. Thank you.